A night at the theater
Tuesday, March 20 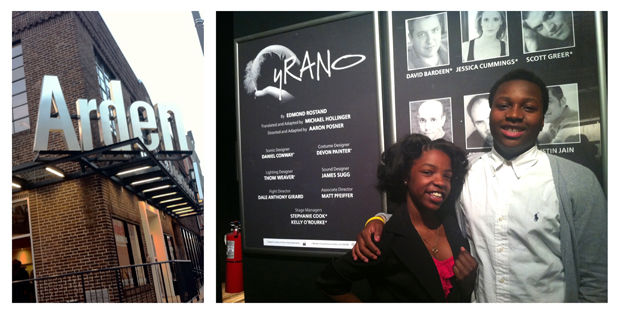 Earlier this month, UrbanPromise's middle school was transformed into an upscale Italian restaurant our buses and vans became limousines and town cars; and our students dressed up in sport coats, ties, dresses, and heels—their outfits rivaling even the most beautiful red carpet gown or tux.

Although this was a school night, the youth of UrbanPromise were headed out for a night on the town. Their excitement filled the air, and was as palpable as the aroma of their pasta dinner which wafted throughout the UrbanPromise sanctuary.

Tamia was among more than 100 of our youth who attended a nearly sold-out performance of the comedic play Cyrano at Philadelphia’s Arden Theatre on an evening in early March.

Through the generosity of the Arden Theatre—and UrbanPromise donors like you—our children and teens were treated to the premiere showing of Cyrano free-of-charge. They laughed and cheered as the lead, Cyrano de Bergerac—a large-nosed poet and dueling master—attempted to woo the beautiful Roxanne with his poetry.

Ultimately, his sonnets were ineffective with Roxanne; but they certainly entertained our students: “Mr. Cyrano was pretty witty,” said Karim. “And I loved the sword fights.” His classmates reiterated these sentiments.

When the show ended, a tired bunch of students boarded the buses and vans once again, their dress-shoed feet dragging behind them.

But despite the late night, they arrived to school the next day still smiling and enthusiastic about the previous evening. They described it as an “unforgettable” event.

The experiences of students like Karim and Tamia are possible only through the gifts of our generous supporters. Thank you for providing them with such memories.

UrbanPromise Academy is a learning community that inspires experiential and expeditionary learning.  The students of UrbanPromise Academy are conducting a survey to find out how Camden City residents feel about the city.  If you are a Camden resident we ask that you click on the link below and complete the survey that follows.

We will analyze the survey answers and report back to the community what we’ve learned. Our  hope is to learn where and how other Camden youth and community leaders can not only become advocates  for needed to change, but also be stewards for improving some of the environmental and social conditions of or city.

Your answers are confidential, and your survey will not be identified with your name.

If you have any questions or want to learn more about this study, you can call 856-382-1873 and ask for Demetrius Marlowe, Principal of UPA.

Thank you in advance for supporting our effort.