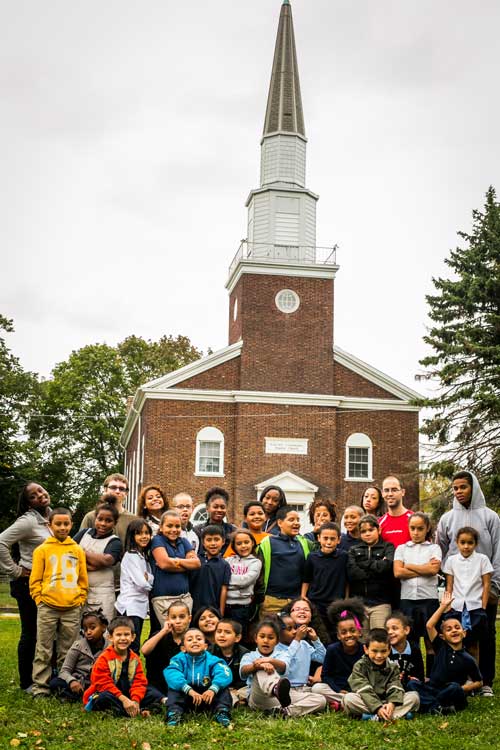 The phone call seemed too good to be true!

After 80 years of ministry, Fairview Community Baptist Church was closing its doors, and the few remaining members wanted UrbanPromise to buy the building.

“We love the ministry of UrbanPromise,” shared one of the committee members.  “We’ve been praying to make the right decision.  We all feel at peace about UrbanPromise owning the building.  We know you’ll do great work.”

For the past year, UrbanPromise staff has been looking for a new location for an afterschool program and summer camp in the city.  We wanted to expand our outreach.  But some buildings were too old, some were in neighborhoods not conducive to outreach, and others were just too expensive.

Then we received the call.  The location was perfect, the building was in great shape (a few necessary repairs, but structurally strong), and the price . . . well,  $25,000 for 3500 square feet of program space and a 3-bedroom manse is hard to refuse. Perfect, in fact.

The church is located in the Fairview section of Camden.  What our ministry team loves about Fairview is that it is primarily a residential community: no industry, no scrap yards, and no factories. Just families, with hundreds and

In our meetings with the church leaders, we learned that Fairview Community Baptist was originally established as a Sunday school for children in the Fairview section of town. For years, the church impacted generations of children through outreach and Sunday school classes.

The Good News is that Fairview Community Church is returning to its original roots—a place where children and teens can gather and experience the love and grace of God and mature as leaders.

When the original appeal was sent to the UrbanPromise donor family, the response was overwhelmingly affirming and positive. You responded, and sent a clear message that you want to see UrbanPromise continue to grow and expand in Camden.

One week of service in Camden, N.J., inspired Souderton Area High School student Jillian Moyer to raise more than $7,000 for Urban Promise, an organization that supports youths in poor areas across the United States.In the summer of 2012, Moyer went with her Souderton Mennonite Church youth group to Camden for one week, working with youths attending Urban Promise’s summer camps.“It was like a regular day camp for kids,” Moyer said. “They have crafts and snacks, a morning daily devotional. We hung out with the kids while they went through their different stations.”Spending time interacting with less fortunate children inspired and motivated Moyer to use her senior project as an opportunity to host a fundraiser for Urban Promise.“The kids really touched me and opened my eyes to a different world,” she said. “I was inspired to see how much love and passion they have for life, even though they live in such poor conditions.”Coming from a family of golfers, Moyer decided to hold a golf outing at Macoby Run in Green Lane to raise general funds for Urban Promise.“I wanted to give back to the organization and keep that connection,” she said. “The point of a senior project is to put yourself outside of your comfort zone and grow up a little. I’d never organized a fundraiser.”With the help of her uncle, who has experience organizing golf outings, Moyer began the fundraiser process over the summer. She solicited the help of family and friends, and members of her church.“The people at my church are golfers, and they already know about Urban Promise,” she said. “I knew they would be most willing to help.”Moyer also reached out to a variety of local businesses, who responded favorably because she was contacting them by herself and for a good cause.“One of the businesses told me they liked that I was the one reaching out to them, not my mom or dad,” she said. “I got several businesses in the area to lend their support by donations and sending golfers to the outing.”The event, hosted in the morning of July 22, had 28 golfers participate. The cost of the outing was $85 per golfer, with lunch provided.“Some of the funds raised obviously had to cover the cost of using the golf course,” Moyer said. “I had a lot of donations come in from family, friends or members of my church that wanted to support me even if they weren’t going golfing. And some of the golfers that did go paid more than the $85.”Moyer’s initial goal was to raise $3,000, an amount she more than doubled.“There was a point about halfway through the fundraising process when I realized I had already met my goal, and still had so much more to do, so much time left to raise money,” she said.Instead of slowing down or wrapping up the fundraising because she met her goal, Moyer continued her campaign and ultimately ended her project with $7,075 raised for Urban Promise.Moyer was able to go to Urban Promise in Camden and deliver the check personally. Urban Promise indicated the money would be used for general maintenance of the programs it offers.“I told them to use the money wherever they needed it,” Moyer said. “It’ll be used around their buildings, to buy school supplies and maintenance, things like that.”The ambitious 17-year-old isn’t finished yet, either. She’s beginning to look for colleges for after graduation, but already has her eyes set on an Urban Promise internship.“They have an internship program that’s eight-weeks long, like an extension of the one-week program I did in 2012,” she said. “I’d love to do that during one of my summers when I’m in college.”